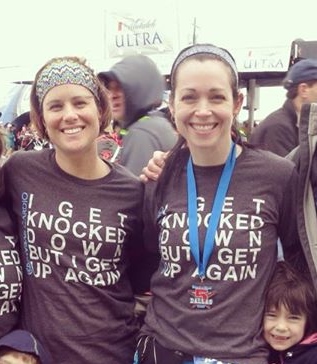 Molly Setnick and Karen Soltero were a team in yet another way: Rock ‘n’ Roll Half Marathon on March 23, 2014

What you call where Karen Soltero was a year ago — at a fork in the road, balanced on a tightrope, teetering atop a precipice — isn’t all that important. What matters is that by almost being out-fought by necrotizing fasciitis, she came breath-catchingly close to being propelled down another path, losing her balance, tumbling over the brink that separates life from death.

Through — 10? 11? — -surgeries and pain that can’t be described, much less measured, Karen fought back.

A year ago, Karen had been training to run Rock ‘n’ Roll Half Marathon. Instead, when her running pals crossed the finish line, Karen was in yet another surgery. The idea of running, much less walking, much less standing, was overshadowed by the determination to stay alive.

But time is mighty, which tends to slip our minds when when we’re in the midst of something really scary or heart-wrenching or just plain awful. And while yes, pain in its various manifestations can linger, we tend to forget that life does go on. That whatever held us down was only temporary. It changes us. But we still — albeit it clumsily at times — heal.

What Karen has to show for her fight — a word which seeing it now seems way too tame — is more than the 22-inch long battle scar her clients at Crowbar Cardio (the gym she owns with her childhood friend Molly Setnick) call “kick-ass.” It’s a resolve, a realization that though life may not be life as it was before, it’s still life, dadgum it.

Last Sunday, March 23, Molly ran the first 7.1 miles of this year’s Roll ‘n’ Roll Half; Karen walked (and even ran a little) the remaining six miles. Up till then, the farthest she’d gone was four.

So on this glorious day almost a week later, seeing tiny green leaves appear on branches that looked dead not all that long ago, I’m feeling again the power of time and of courage and of friendship. For those and, above all, for healing, The Grateful Runner says thank you.

1 thought on “Saying thank you for healing”